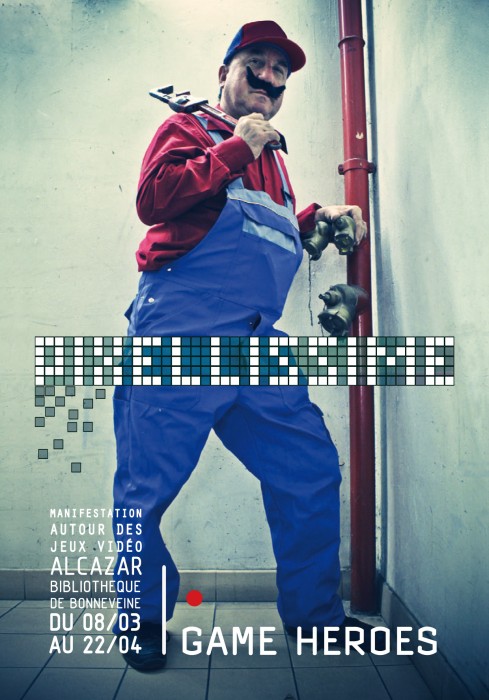 Game Heroes is a playable exhibit I just curated for the Library Alcazar, downtown in the center of Marseille. For this second retrogaming show – Playtime, my first retrogames exhibit happend in 2002 at la Grande Halle de la Villette – I worked on the heroes thematic to create a bridge between the gaming world and the book universe of the Library.

Game heroes deals with the history of video games through the heroes who have shaped the imagination of nearly 4 generations of players: Pacman Zelda Supemario, Donkey Kong, Sonic …

What distinguishes these games is their graphics mainly in two dimensions and appearance pixelated. Hence a certain nostalgia for players to this type of game and this period, given the advent of 3D gaming to the gameplay, sometimes much less creative.

From myth to fairy tale, the hero accompanies the quest for the meaning of being human. In each society marked by a loss of identity markers, identification with the hero represents a catharsis whose function is to forget the narcissistic injury and loss of control over our destinies.

Identifying with a hero often comes from a character trait, personality of the hero or the gameplay. Some game characters like Mario or PacMan does not work on the principle of identification, but on empathy: because the character is friendly, the player wants to help thwart all traps and spells.

In the video game, there are two heroes: the character of the game and the player who made the move from level to level. Interactivity gives the player a power over the hero and its evolution. The time of the game, the player is master of his destiny video game. He can face death without fear of the consequences of his actions. Alternately, it may be the valiant hero or nemesis. With the virtual, the player can take as many personalities as he wants, as many digital identities.

The hero in video games uses the same storyline as in the old myths. Protagonist of the story, the hero must prove his courage in braving the dangers, obstacles and enemies in order to continue his quest. He will deliver his sweetheart, after killing all the baddies.

Often ordinary character, the hero does not become successful only after many trials. Beat the machine is then a goal for the player very rewarding and the enemy is more terrible, more the victory is beautiful. This is the principle of fighting games, which from Tekken and Mortal Combat introduce a gradation in the violence, to allow players to romp through play and just enjoy it.

The visual identity was created by students from the Visual Creation School in Aix-en-Provence, playing on the idea of every daily heroes and also refering to Andy Wahrol and hs prémonition : everybody can get a minute of glory in our super egotic society !

3 Nintendo Game Boy with a selection of 20 different games

3 Sega Game Gear with a selection of 20 different games

Machines and games are provided by Archeopterix as well as the Megalo création :

Mégalo is an artist who works on metamorphose. From the accumulation of thousands of useless marketing toy, it gives new meaning to these materials and denounces consumerism and pollution … For the exhibition game heroes, it creates an original creation with this giant Donkey Kong.