Ruin, is a Transwoman and she is a PHD student in Gender and Trans identities. She is the co-founder of the Queer Archives in Seoul.at the Korea Queer Archive. Established in 2002, QueerArch started as a personal archive of Chae-yoon Hahn, a prominent activist who was the editor-in-chief of BUDDY (1998-2003), one of the first queer-themed magazines in South Korea. Today, the collection includes not only Hahn’s personal archive, but also over 700 films that were donated from the Seoul Queer Film Festival in 2006.

Ruin does not speak English and as I could’nt find a translator. Sanglim Han, a media artist I met at ISEA offered me to be our translator, from Gwangju, via Wathsapp. This is one of the most epic interviews that I carried out in Korea, with my Zoom microphone on a stand on the table between Ruin and me, attached to my phone, on a selfie tripod too, recording the English translation made bby Sanglim for me of Ruin’s words who was seating in front of me;)… 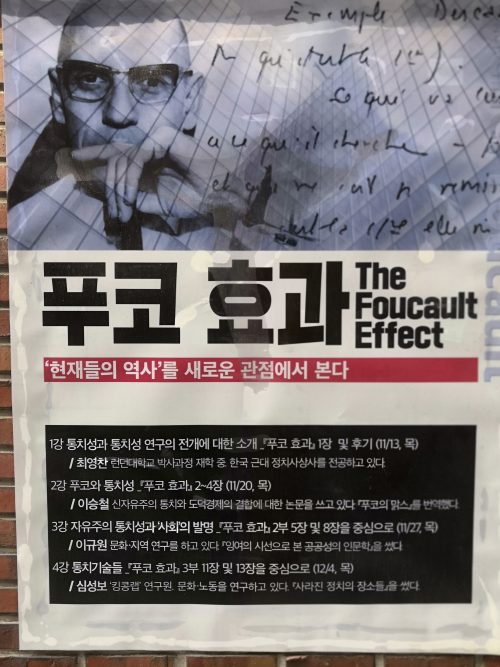 Foucault and Benjamin as emissaries

A magical encounter, the result of chance or fate? Before my arrival in Seoul, I had desperately tried to contact the Korea Queer Archive but all my messages in English remained unanswered. One afternoon, after an interview with Tacit Group, I walk in a neighborhood near the market de Mangwon, in the middle of gentrification, when suddenly, a poster caught my attention: Michel Foucault. I turn around and see another one by Walter Benjamin which I then take a picture of. A person leaves the building and invites me to enter it. 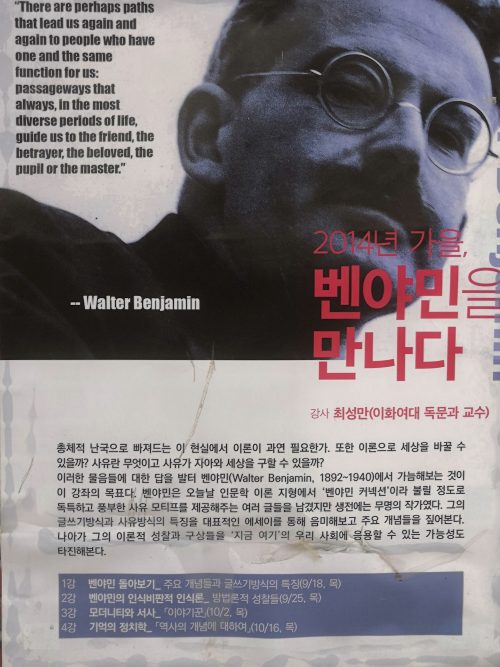 It is a philosophical bookshop-café which also offers readings and meetings. There is a “hidden” corner, with a very nice collection of queer and feminist books! I then explain my world tour focused on feminist and decolonial queer practices and I learn that in the evening there is a meeting on these questions. I go back with Yohan Han and meet Ruin, doctoral student on gender and trans identity issues and responsible for the Korea Queer Archive …

With Ruin, I discover the history of the queer movement in Korea, the history of the struggles for the free determination of sexual orientation and the symbolic but perpetual violence of society’s control over people, in the family, at work . Hide your identity so you can keep your job, have two lives, one with your community and one hidden in a society of control. The dictatorship is in the North but deeply rooted in people’s minds. Likewise the image of the woman, who must be beautiful, attractive, wear skirts. As for men, no feminization is allowed under pain of losing their job. To change your identity during a transition, in addition to a medical certificate and a psychiatric certificate, you also need the consent of both parents.