What is going on when video games turn to be a medium that allowed artists to create? When artists invest fields such as virtual universes, or network? When contemporary art meets entertaining and freaking universes?

Back from Istanbul and for the fourth time, the international events GAMERZ spreads over the city of Aix-en-Provence, taking over three locations of contemporary art. From the very beginning of the year 2009, a real cultural tour emulates the city during a month, inviting the public to discover the new creation through a series of exhibitions, meetings, and performances. Far from a simple festival, GAMERZ deploys a deep work over artistic creations and new interventions around creative processes.

Realized in cooperation with Germany, Czech Republic, Slovenia, Slovakia, Turkey, Austria, England, and in collaboration with Second Nature association, M2F Créations is undertaking a real inter-cultural exchange and proposes an intense rendez-vous with contemporary arts in the region of P.A.C.A.

For this edition, I selected two programs of machinimas and I presented the video Gold Farmer by the artist Axel Stockburger. 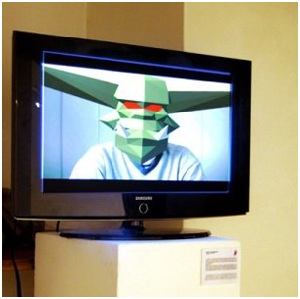 ‘‘Gold farming’’ is the art of earning real money in online games. The boundaries between play and work become blurred here: on the other hand, we can see the cracks and inconsistencies between privately-owned global media empires, if, for example, European gold farmers meet Chinese. (Axel Stockburger).