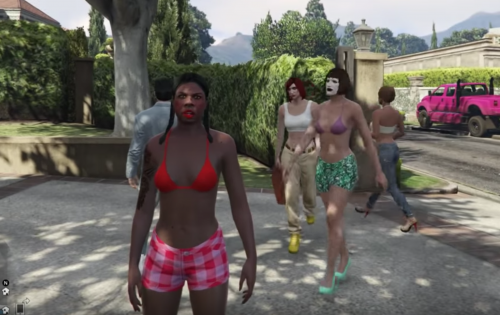 Isabelle, a globe-game-trotter has decided to celebrate 20 years of curation and activism by meeting independent video game developers and artists from Asia, Africa, the Middle East and South America, focusing on gender dynamics and post-colonial gazes. The fourth step of Isabelle Arvers world tour is set in Bangkok and her journey will deliberately ignore the mass tourism hotspots and seek the truth in Thailand through the critical artistic perspectives emerging subtly on the margins. Poptronics publishes her chronicles around the world.

As beautiful as the South of Thailand appears to be with its world-renown scuba diving and beaches, I get the hunch that it wouldn’t be the best place to get to know the Thailand which Thai’s live and breathe in. Fleeing from impersonal Thailand shaped by mass tourism which makes everywhere look like nowhere, an extension of the same hotels, same breakfasts, activities for children and cheap drinks.
I won’t be enjoying pristine beaches and battling through selfies, buses of Europeans and an imagined, projected and unfaithful image of Thai culture.

Instead, my world tour focuses on engaging critically-minded independent game studios and artists. Throughout my encounters in Bangkok, I slowly unveil a Thai perspective which goes beyond the system of censorship which the 2014 coup established as it took power.
Here many artists have a critical perspective and are leftists but its not safe to affirm such views. The critical works I have discovered in Bangkok are subtle in their criticism out of a necessity to be gentle when it comes to criticizing the military junta. “Subjects are engaged with subtlety, never directly, explains Pierre Bichon, from the Tars gallery in Bangkok. It is nonetheless possible to feel what people think”

One of the first artists I encounter is Thanapol Virulhakul, a choreographer and the director of Democrazy Theatre Studio, that has had to close in 2019 due to a lack of credit. It became famous for producing contemporary shows which didn’t shy away from being profoundly political. These included shows such as: “The disappearance of a little boy on a Sunday afternoon” (2016), a provoking piece on forced disappearances.

A week after the coup by the commander of the Royal Thai Army Prayuth Chanocha and his forces he launched “Hypster the King” a satirical contemporary dance show which interrogates if love is possible under constant propaganda and without freedom. Thanapol Virulhakul explains that he wants to recreate the “situation between dancers and the crowd who read out political propaganda”. Thanapol is actually interested in ‘body politics’. A term which not only refers to choreographies on stage, but it also covers the general implicit rules which govern our day to day lives. “Of course we are all living in a world, not as absolutely free subjects. What we can and can’t do is determined by rules. It’s quite the same in choreography according to me: there are established rules that permit us to conceive our lives. We are permanently reminded about what we can and cannot do, where we can walk, in what way… If you are a Buddhist, you are tough a series of movements which you must follow to pray, you kneel, you rise again… The same goes for Islam. This choreography of laws that organize bodies becomes a game between the dancers and myself. For example for one of my shows, I set down as a rule that the dancers were not allowed to move, standing up straight. Only when they couldn’t take it anymore could they leave the stage performing dance moves on their way out.”

Thanapol introduced me to the concept of crypto-colonialism, theorized by the anthropologist Michael Herzfeld: “It’s a system under which you are not colonized by western nations directly. It is rather the monarchy which has invited western powers to help set up a colonial political, cultural and religious order. The north of the country was not even part of Thailand a hundred years ago. To become western is the norm which the Monarchie has sought to impose upon the North, the East and the South. This model has imposed a new language, religion, culture and way of life…”

Similarly, the artist Panarin Suejindaporn says: “After the political crisis in 2013-2014, trust in politicians fell to its lowest in Thailand. The country submitted to military control which interrupted the democratic system through its coup d’etat. The government then engineered an artificial public order emulating peace with no actual popular support. This limitless power swiftly turned the country rotten and generalised corruption; bribes have become the norm leaving many citizens divorced from their rights. My role as an artist is to oppose the absolute use of power the military government is using to as they claim: modernize Thailand.” Panarin shows me the video “Drawof evoM” which stages a body forced to march du to military rule.

The absolute rule by the military junta is also the central theme of his virtual reality installation ‘Look Over’. “The use of VR creates a symbolic sense of absolute power. When a spectator puts on the VR headset, they automatically surrender to my design, one is closed into a world. we are in some sense stuck in this world. In Look Out we have to face harsh and painful scenes, which no real choice to run away. This resonates with our current state in regards to the military power.” This use of video games in order to deconstruct and criticize opens up a space in which one can show what one cannot say.

The truth about Virtual Sexual Harassment

Mirroring Panari, Natthorn Tansurat is a former student of the Sulpkorn visual arts university. She analyses contemporary social issues with a special focus on behaviour in virtual reality and politics in South East Asia. Her last work is a VR installation in which she addresses sexual harassment. “If VR is real, then sexual harassment online is just as real”. ‘Dream Market collective’, is an animation which is part of her installation, a video collage which calls to mind machinima formats. It analyses the consequences of online sexual harassment in VR communities.

“I wanted to explain how one can be deeply affected by words and acts in virtual reality, to bring forth the consequences which virtual bullying can have. I spend most my time online, and both on the internet and in video games I realize how difficult it is to share one’s traumas and emotions to older generations. Older people don’t always understand the very real effects of virtual realities. I was deeply inspired by my experience in ‘VRchat’. This subject is generally underlooked by Thai society.” Her work resonated more with a male audience potentially due to the horror game aesthetics. She adds though that “most the sculptures I placed in the installation are conceived for the male gaze, I try to force the audience to become a man, to become a sexual harasser.

The same generation is targeted through the same medium with Gotuya. An artist which develops virtual reality installation. For her graduation, she built her first project using the Unity game engine. In her project, we are lead to struggle through Bangkok’s traffic and chaos, leap over temples and riverboats, and swim through the rice fields up in northern Thailand. Plunged into the backwaters of Thailand we pounce around local folklore, moving as Super Mario would.

In the exhibition “Platoexpectonum: Risin Museum” set up by Nawin Nuthong at the Speedy Grandma gallery, Gotuya combines elements of the game “Half life” and the game engine Unity in order to build a disturbing world. The audience wanders above a sea of blood, under planets illuminating the vast red body of water, only accompanied by beasts best described as the spawns of spiders and bats. The only effect that the player can have on the installation is through the book of knowledge which offers you to face a two-headed creature.

Gotuya is currently working on a new lesbian aesthetic, a style which is rather rare in Thailand compared to the popularity of the Yuri Visual novels particularly in Japan. It’s thank to Nawin Nuthong, a young auctioneer specialized in art that I was able to meet Gotuya. He creates fictions around the exhibition he curates. The artists he works with are required to merge into the fiction with their own mediums to co-create and work of art under the format of an exhibition. Nawin often speaks of portals, which are so common to the world of video games. He imagines his portals as being doors not between universes but rather between different artistic practices.
At the Bangkok City Gallery, I meet Thuangkamol Thongborisute which is also a Silpakorn graduate, who is now studying at UCLA. She had actually participated in one of my Machinima workshops some years before at the Gamelab in UCLA three years before we met in Thailand. She too is a member of this young generation of artists using video games as a medium to create digital installations. In one of her productions, she rebuilds a space resembling a gym in the 1940s. This was the decade in which advertisement will start focusing on the perfect housewife which is meant to care for her body and her husband all throughout her adult life.

The design of the interface of “Face exercise machine” is inspired by the first sport machines people started buying in the late forties. “Your face needs exercise not only does your body”: is also the pitch of the game. The scope of the game is to work on your facial muscles. We are lead through five levels in which we are taught to exercise our nose, our eyes, our cheeks and so forth…
A humouristic take on the cult of the body: ‘Face Exercise machine’
is a prototype developed for a campaign by the brand Charming NN associating a steampunk universe with a critical design to study and shed a light on how we identify with faces and use them as a primary source for our identities. Charming NN believes it to be important to believe in mental and physical self-betterment. “A long term method to have a healthy-looking face is at the heart of its research.”

The queer streaming channel Roger Films marks a fabulous end to my stay in Bangkok. Tuang T. introduced me to it. Although I don’t speak Thai, I am immediately charmed by the lively and hilarious universe of Vissarut Roger Jipiphob and his crew. A crew of transexual characters using their bodies, props and make-up which challenge the norms of traditional beauty.
The original idea of Roger Films was to create a safe space for gamers to play together amongst friends. Due to its notable success on Youtube, Roger Films has grown to be popular on other platforms. Sims and GTA are the games they stream the most and whilst they do so they hammer a message to its audience: “Whether we are black, trans, gay, ugly, disable or cross-dressers we are all good gamers and creators of good content in which we try to challenge how people think. It all began seven years ago with a romantic comedy created using the game Sims by Vissarut. In a Thailand ruled by strict gender norms the main character is a man who is playing a woman with a woman’s voice. Queer characters appear from the start. The most successful of these characters is a now famous queer ghost. These films are truly unique as they blend different aesthetics through the appearance of the characters but also in the way they move added to the clear intention of the players to have a lot of fun.