“Cheats or glitch ? Voice as a game modification in Machinima”, 2011

read the article on ISSUU 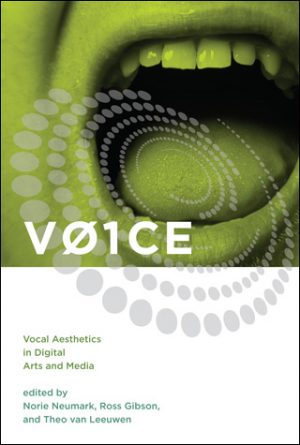 Voice has returned to both theoretical and artistic agendas. In the digital era, techniques and technologies of voice have provoked insistent questioning of the distinction between the human voice and the voice of the machine, between genuine and synthetic affect, between the uniqueness of an individual voice and the social and cultural forces that shape it. This volume offers interdisciplinary perspectives on these topics from history, philosophy, cultural theory, film, dance, poetry, media arts, and computer games. Many chapters demonstrate Lewis Mumford’s idea of the “cultural preparation” that precedes technological innovation-that socially important new technologies are foreshadowed in philosophy, the arts, and everyday pastimes.

Chapters cover such technologies as voice mail, podcasting, and digital approximations of the human voice. A number of authors explore the performance, performativity, and authenticity (or ’authenticity effect’) of voice in dance, poetry, film, and media arts ; while others examine more immaterial concerns-the voice’s often-invoked magical powers, the ghostliness of disembodied voices, and posthuman vocalization. The chapters evoke an often paradoxical reassertion of the human in the use of voice in mainstream media including recorded music, films, and computer games.

Norie Neumark is Professor of Media Studies, La Trobe University, Melbourne. She is a sound and media artist (http://www.out-of-sync.com) and the coeditor (with Annemarie Chandler) of At a Distance : Precursors to Art and Activism on the Internet (MIT Press, 2005).

Ross Gibson is Professor of Contemporary Art, Sydney College of the Arts, University of Sydney.

Theo van Leeuwen is Professor of Media and Communication at University of Technology, Sydney.

ORDER at THE MIT PRESS :