On the 6 june, the IMERA (Institute for Advanced Studies) in Marseille, hosts a workshop on “Re-present the boarders”

“The Emborders filmmaking/research project problematizes the effectiveness and scope of sexual humanitarianism by comparing the experiences of two groups of migrants who are addressed as potential ‘target victims’: migrants working in the sex industry and sexual minority migrants. Both groups can be targeted by sexual humanitarianism as potentia victism of sex trafficking and sexual minorty refugees respectively. Emborders assembles the narratives of victimhood and emancipation they perform in the context of original research interviews.”. Nicola Mai

Then, at 5pm, Heath Bunting, artist, activist, one of co-founder of the net.art movement and the sport-art movement ! and also before street artist presents the Status project, initiated in 2004. After the presentation Heath Bunting animates a workshop where create your own new idenentity.

The Build a new Identity workshopshows how you create your own legal identity. As Bunting demonstrates, identities can be constructed over time by developing relationships to place a given “person” within a web of shopping cards, cell phones, bills, government correspondence, and other “personal” data. 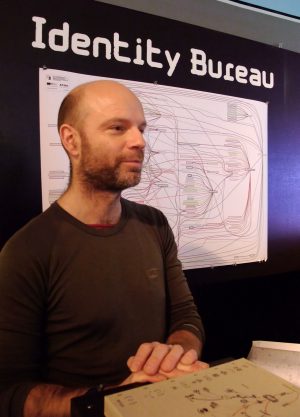 “The first part of Status is to map the system and how we conform to the system to maintain ourselves, to maintain our identities, the second part of the project is to make new identities and to sell them. The status project is also producing new british natural person identities and running a series of european workshops in which people can build their own natural persons.” The Status Project, Heath Bunting

To know more about this project and how it is linked to the idea of boarder porosity, listen to this interview, where he discusses his Tate commissions, BorderXing 2001 and The Status Project 2008.