Interviewed by Mathias Jannson, for the gamescenes blog 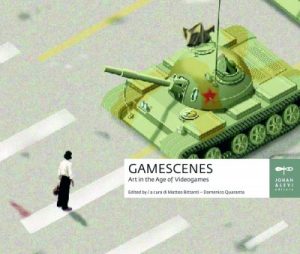 GameScenes is conducting a series of interviews with artists, critics, curators, gallery owners operating in the field of Game Art, as part of our ongoing investigation of the social history of this fascinating artworld. Our goal is to illustrate the genesis and evolution of a phenomenon that changed the way game-based art is being created, experienced, and discussed today. In September 2010, Mathias Jansson talked to Isabelle Arvers about the French Game Art scene over email. Below is the full conversation.

To read the interview on gamescenes.org

GameScenes: You have participated as a co-curator to the Gamerz Festival held each year in Aix en Provence. What was your role and how has the event evolved through the years?

Isabelle Avers: The festival Gamerz is organised by a collective of game artists: M2F creations.They contacted me when I came back to the south of France and showed me their art related to game culture. We immediately decided to work together because we have the same idea of what game art is and we also have some common roots and interests: parties and graffiti. I think it is important to say that because we are not interested by the idea or the attempt to legitimate the video and computer game matter in front of the contemporary art world. We don’t have an elitist conception of what is art and what is not art. What we want to do is the encounter of many different artistic disciplines and practices related to game culture and reverse engineering.

Gamerz is a festival organised as a parcours in the city, based in different art galleries. We show performances of dance or 8-bit music, interactive artworks, photographs, installations, videos, machinimas. We do not want to focus only on interactive artworks but we want to show a large diversity of ludic artworks talking about aesthetics, playability, social or political matters. We are players and we play with art, ideas and concepts. We don’t want to have a tight and close idea of what game art is.

We also try to show artworks of young or emerging artists. What is interesting for me as a curator is that M2F Creations has a huge network of artists which are not the traditional “names” of game art. We have a strong collaboration with artschools and artists from the East.

My part in Gamerz is to select international artists. In 2009, I curated the work of Alex Stockburger, a video about goldfarmers and last year I curated two brazilian artist works: Tania Fraga with an interactive sound game “Danca Maluca” and a very funny and beautiful video of “Rick Castro Super Rick”. This year, we want to invite Blast Theory but we are waiting for some institutional funding to be sure to host them under the right conditions… I also curate an annual Machinima program.

GameScenes: What’s your take on the French Game Art scene?

Isabelle Ivers: In 2002, I curated an exhibition titled Playtime for a digital art festival at la Villette, between that event and Gamerz, I only had curated game art exhibitions in other countries: Australia, Germany, Italy, Norway… Before Playtime, Laurence Dreyfus Hanout curated a game art exhibition for the contemporary art biennial in Lyon. Then, Margarita Balzerani curated shows about virtual worlds and machinima (The Atopic Festival). Aside from these examples, I could hardly talk about a huge interest for game culture in France in the last decade. On the other hand, our new French cultural Minister decided to raise awareness about video games, so we can hope that the situation will improve. First there is a new interest for a nostalgic part of game culture and some events are organized around the theme of retrogaming in Paris (right now, there is an exhibition titled Musegames at Les Arts et Métiers) I am also preparing a new exhibition tiltled Gameheroes that will be held in Marseille in March 2011. Philippe Dubois who is a collector who I worked with in 2002 for Playtime is also working hard to create a game Museum in France. The artworld is quite sceptical about game art and the artists who were involved with game art some years ago and who are now in the contemporary art scene tend to let the game art for some more “bankable” artworks. I am thinking about the collective Kolkoz who did some very good artworks related to games (Kolkoz.org a game that simulated art collectors flats in which you could destroy everything and especially the art collection) and also to Martin Le Chevallier who did an excellent video about the artificial life in video games Society or a surveillance game: Vigilance 1.0 (2001). Now they are involved in a very different type of research, unrelated to games. But a new scene is emerging: the more I visit art schools, the more I meet students interested in games. I am really happy about that. Also some game schools like Isarts or Enjmin are producing some artistic games. The frontiers are blurring and we can hope that it will change the perception of immaterial and interactive works in the contemporary art scene. The new names in game art are all artists involved inEniarof, Gaspard Valerian, M2F Creations, Antonin Fourneau, Benjamin Nuel...

About critics and journalists… Margherita Balzerani wrote an article realted to political games and I am also writing about game art in magazines like Amusement directed by Abdel Bounane. It is a very good and beautiful review about interactivity, digital art and universes, very elegant with texts written by game specialists like all the searchers of OMNSH (Observatory of virtual universes and games) they are anthropologists, sociologists, philosophers, psychoanalysts (Serge Tisseron, Michael Stora). A very interesting group of intellectual writers.

GameScenes: You have also been working as curator for exhibitions with machinima and you have also written a lot about machinima. What kind of machinima are artist doing today and what games are popular to use?

Isabelle Arvers: Right now, I’m working on a new machinima show for the next edition of Gamerz (December 2010). Besides the games and the virtual universes traditionally used to create machinima – The Sims, The Movies, Second Life, Half Life, Halo and GTA, I would add in 2010 the following games : Left 4 Dead, Assasin’s Creed and Call of Duty. There is also an important use of dedicated tools like Moviestorm. I really like the work of a Swedish artist William Fink who only produces Machinima with Moviestorm. His movie Phantasmagoria is a very short but intense one. I also enjoy a lot the work of Phil Rice also known as Overman who works a lot with Moviestorm, for exemple his movie “What I like in Xmas…” very good and funny. Lately, the main change in the Machinima world appeared with Second Life which seemed to be the easiest tool for many artists to create Machinima. Last year, I curated a machinima program for the exhibition Gameplay, at Itau Cultural in Sao Paolo in Brazil, where most of the artistic machinima were created in Second Life: “Seeing spot, beeing dots“, Evo Szuyuan (Brigit Lichtenegger) NL, Orchestral investigations #9, Gumnosophistai Nurmi (Leif Inge) and Evo Szuyuan (Brigit Lichtenegger) NL Arthole presents : ORIENTATION by Arahan Claveau & Nebulosus Severine, Chantal Harvey, NL, The Body is obsolete, Chantal Harvey, NL, Virtual Gantanamo, Bernhard Drax, US, Maseno Project, Serenity Mercier, CA, Tristeza e Esperança, Carla Broek, BE, My Life as An Avatar”, Annie Ok, US.

These works are politically or socially orientated, or they purpose aesthetic and poetic visions. We are far away of the humoristic works of the beginning of machinima. They also offer a critic of these virtual worlds, like in I Mirror of China Tracy, which talks about Second Life as a world where everything is to sold and also questions the virtual identity inside this kind of world and the meaning of encounters in Second Life. But I wouldn’t speak about a new trend concerning the use of Second Life but more about some technical necessity and facility. What is interesting is that there is a certain kind of democratization of this movement, not only reserved to hard core gamers and the little community of special effects or game developers, but it is now open to artists, women and youngsters.

GameScenes: You have written an article with the title “Cheats or glitch? Voice as a game modification in Machinima” in VOICE. Vocal Aesthetics in Digital Arts and Media (MIT Press), edited by Norie Neumark, Ross Gibson and Theo Van Leeuwen. What does machinima have to say in the world of ‘digital arts and media”?

Isabelle Arvers: I am really happy to be part of this publication directed by Norie Neumark, she was really patient with me and my English! We began this collaboration in 2006 and the book is just out now. It is a book about voice in digital creation. My point is that voice is the only human being part in machinima (besides the fact that characters are moved by humans to create the action). It is voice that gives a certain granularity and “organic” side to digital images. In a movie like “Bill & John” by the French directors KBS Production, the scenes are created with the war simulation game Lock on Modern Combat. There are no characters in this game, you never see any characters moving or expressing themselves, but this movie is super funny and people looking at it lough a lot. It comes only from the voice, which is quite powerful.
KBS Production, “Billy et John”, machinima, 2007

The other point in this text is to speak about voice in machinima as a situationist detournement, because voice gives a totally different meaning to images, like situationists were doing, taking kungfu movies to speak about revolution. To give an example, when Alex Chan took the game The Movies to create “The French Democracy” in 2005, he used a game to express his point of view about the French riots and he gave an other voice to all the youngsters which were seen as the devil by the French medias.

GameScenes: What is you personal relationship to videogames? What specific traits of this medium appeal to you?

Isabelle Arvers: I am a player, I play with games as I play with ideas. My background is political sciences and for me games are super powerful. For many generations, it is the first way to learn and to be in the world, it is a way to educate, to have fun and to interact with life and other people. I also see games as a mass consumption object that can manipulate people’s mind. For me, games took the place of fairy tales to build young generation’s imaginary. So it is for me a very serious question and in all the exhibitions When I curate I try to promote alternative games or artworks which offer another point of view to this very dominant culture. I always try to promote reverse engineering (Machinima, 8-bit or chip music) all the possibilities offered by a detournement of the initial use of games.

Today, I focus on machinima workshops that I develop towards youngsters,I want to enlarge the capacity of using machinima as a new way of expression, besides hip hop, because it allows you to learn how to write a story but also better understand the power of images and how they are built and how they can manipulate our mind.