No Fun, Games and the gaming experience, Piksel free and opesnsource software festival

An exhibition co-curated with Gisle Froysland

No Fun! games and the gaming experience

If you ask a hard core gamer why he likes a game, his answer will often be: “I like it, because it’s fun” Why has fun nowadays become such a serious question? Because, today, game benefits are the largest in the entertainment industry, and as a matter of fact, they have become the new media by excellence: a tool used massively to manipulate, to communicate and influence certain behaviors.

Then, there is another reason to think about games as a serious question: they represent a new mode of interaction to the world for a whole generation. So, game content is a huge question.


Net.art was a reaction to the possible uses of the Internet, driven only by marketing and commercial interests. It seems that now, artists are using games as a way of expression and as a tool of denunciation of the consumerist and informational society. This is the purpose of First Person Spam by Malte Steiner, an open source games developer: to denounce the amount of spam that are overflowing on the net. In FPS, you play inside a 3d labyrinth where, for once, you can shoot your virtual intimacy invaders.

Our world is not so fun and especially when mass media tends to present it as a big and violent virtual game with its deep visual cinematic as 9/11, Saddam under arrest, Iraq War images. And in this game, you are not allowed to play, you just have to consume its representation. To react to this, (t)error by Robert Praxmarer deals with the fact by taking the position of mass killers, to make you feel how narrow the line can be between reality and its representation. Robert reports that once, a player of (t)error said, “I just played Osama Bin Laden, I was killing people, was it fun?”

Many art pieces related to games have the war and its rejection as a main subject: Family War Portrait by Arno Coenen, They rule by Futurefarmers, Article 30 by les Virtualistes, Mission Taliban by Yucef Merhi. Against proliferation of images and information, artists and activists provide another point of view by using the game aesthetic, or by hacking games and providing a gaming experience to create a distance.

It is true that games are mostly violent and often used as a tool by the military complex to endorse new soldiers. By creating short films (machinima series by red vs blue), interviews from games like Halo 2 ( This Spartan Life by Chris Burke) or hacking consoles to create songs, artists offer an alternative to the audience. And what is interesting in the Piksel community is that the critics of the game-as-a-media can be pushed to its limits, because it is created with open source 3D real time technologies.

Autonomy in technology seems the last chance to keep its freedom in the media age, to escape a new type of control. Marketing or political manipulation inside games is becoming another strong issue. For Michael Stora, a French psychoanalyst, specializing in video games as a therapy for autistics or youngsters with difficulties: “time of the game is a pleasure time, a time where you can manipulate the images as they manipulated you before”.

But, what is going to happen if same manipulations enter inside the games, “if big game companies add subconscious content to their games?” asks cOdeNerr0r, the authors of Mindbending. Mindbending is a fake company developing real software games that will make your children feel quiet with “Tranquilizer”, or religious with “Christianizer”. Because games are already a marketplace for business players, adds for cars, food or clothes are now inside games. On the road that you follow with your car, in the MMPG where you can order your pizzas online…

Mindbending’s aim is to warn people of what could become of games if we don’t pay attention to their content. It doesn’t mean to avoid games! It just means that we need to promote and diffuse more and more of all these new artistic practices and offer them to a larger audience. It is necessary to create an effective counterproposal. Awareness is good but it needs to touch the masses, or at least the core gamer generation.

To create this encounter, this kind of exhibit can be promoted on gamer mailing lists and also through street marketing in front of the gaming rooms. It is thus necessary to mix parties with exhibits and workshops to really open the doors of knowledge to a broader audience. By using game aesthetic or by hacking game engines to deal with urgent issues, artists enlarge their capacity to be understood by the audience.

Time’s Up artworks are some of the most attractive for any type of audiences. From Velodrome to Spin (the interactive sphere), their installations allow easy participation from the audience playing with a lot of pleasure. Within these fun experiences, artists talk about biomechanics and about responses to the action principle. In Cavity Resonator, part of The Sensory Circus, you are invited to sing with the King and dance as the King.

Transforming the city and real space into a playground is another way to go back to the action through a gaming experience. The Travel Agent, a collaborative installation by Drone & S.O.U.P is a wireless gaming urban intervention. The Travel Agent explores the concept of being a “Tourist” in the globalization age and refers to the strong power of the images above reality.

The Interactive Light Net project purposed in situ by Achim Wollscheid, finishes by changing the exhibit’s venue into a poetic playground. Sounds and interactions of the exhibit visitors are captured to create in real time the light animation of the building. 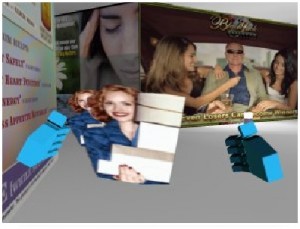 As an undesired sideeffect of the globalisation and one of the few businessmodels which survived the dot.com hype, unwanted advertisement email services, known as spam, are an important factor of net traffic. More then 60% of the emailflow are spam and although the response rate is in the promille range, it generates enough revenue that even big companys despite of the semi legality use the services of massmailers. 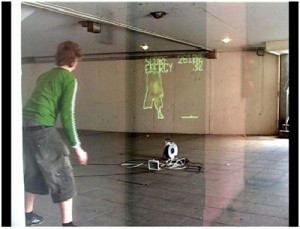 Whom would you like to play to get the world back into right shape? George W. Bush, Osama Bin Laden, or rather Tony Blair? Starting the computer game (T)ERROR, the player is spoilt for choice. A camera tracks the player’s movements and a projector throws the players outlines in original size on a white wall in front of him, all in realtime.
When the player kicks, his shadow will kick. When the player ducks or jumps to avoid bumping into an enemy jet, his shadowy avatar will do exactly the same in real time.

The empty silhouette of the player gets filled out – and this is the players choice – with the face of George W. Bush, the flag of a state which supported the Iraq war, or the body of Osama Bin Laden.

For gaining a good game score, you will have to fight evilly.
Being slipped into this stereotype role, you have to avoid tanks, submarines and fighter planes, you have to collect oil pumps and dollar notes, and you have to kick civilians begging for help. If you succeed in all these matters, you are the lucky winner and rise to the next game level. 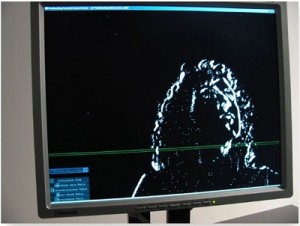 Mindbending Software Inc. is a company specialized on psychological conditioning software packages for children.
With the newest technologies our products infiltrate the computer games of your kids and mingle various subconscious or conscious conditiong messages and images in the game contents.

The technology can be compared with the subconscious pictures in the TV program, and if you don’t know about them, ask yourself why are you buying all those things you don’t need. You see it works !

Our software uses the same and some other patented methods to condition your kids.
Try it out, if you aren’t satisfied you’ll get your money back ! 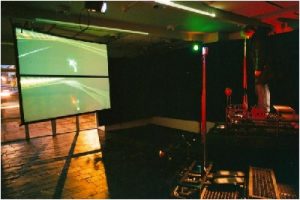 A large, vacant terratorium, the surface reaching into the distance, cavernous, an empty space. Moving over the plane, the visitor employs hip-swinging balance, twisting foot positions. Their path is marked with the tracks of their voice – their sounds leave traces. Returning to those traces, the visitor replays the sounds, hearing the mutterings of those who have gone before, patterned in the plane. Looping over the surface, sounds laid down and replayed, extra enunciations begin to form loops and rhythms, repetitions and replacements, resonating the space with sounds and their replayings. Activating the space with positioned sound and tracing it with bodily motion, the cavity becomes resonant with voiced memories and embodied remembrances. 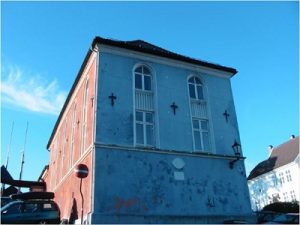 A portion of the facade is overlaid with a grid of red LEDs,
which change lightness or pattern according to real-time sound analyses.
This interface between architecture and the by-passers is created by the relationship
between common sound sources (the voices of passers-by, the noise generated by local traffic) and the programme that regulates the transformation. 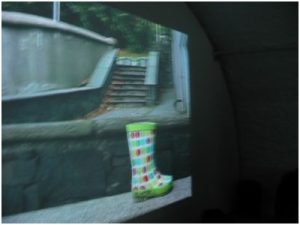 “Travel agent” proposes a new way of travelling in the city. A camera moves through its streets, following its very own agenda, constantly moving, eager to discover unseen places. Images and sounds reveal to our eyes the city’s hidden bricks, the flow of information on which it is built. Behind the camera, an invisible traveller asks us for guidance. The piece interrogates our conceptions of travel and tourism.